After much faffing about today I’ve got the latest version of the UniversalViewer building locally, and I also know how to listen for changes in the canvas index. Next, I have to do something about the CSS name clashes with Bulma…

Files digitised by the National Archives of Australia this week: 25,981 New in Trove this week:

Added to Trove newspapers this week:

If you have a dataset that you want to share as a searchable online database then check out Datasette – it’s a fabulous tool that provides an ever-growing range of options for exploring and publishing data. I particularly like how easy Datasette makes it to publish datasets on cloud services like Google’s Cloudrun and Heroku. A couple of weekends ago I migrated the TungWah Newspaper Index to Datasette. It’s now running on Heroku, and I can push updates to it in seconds.

I’m also using Datasette as the platform for sharing data from the Sydney Stock Exchange Project that I’m working on with the ANU Archives. There’s a lot of data – more than 20 million rows – but getting it running on Google Cloudrun was pretty straightforward with Datasette’s publish command. The problem was, however, that Datasette is configured to run on most cloud services in ‘immutable’ mode and we want authenticated users to be able to improve the data. So I needed to explore alternatives.

I’ve been working with Nectar over the past year to develop a GLAM Workbench application that helps researchers do things like harvesting newspaper articles from a Trove search. So I thought I’d have a go at setting up Datasette in a Nectar instance, and it works! Here’s a few notes on what I did…

Although the steps above might seem complicated, it was mainly just a matter of copying and pasting commands from the existing documentation. The new Datasette instance is running here, but this is just for testing and will disappear soon. If you’d like to know more about the Stock Exchange Project, check out the ANU Archives section of the GLAM Workbench.

This week the National Archives of Australia digitised 21,488 files: 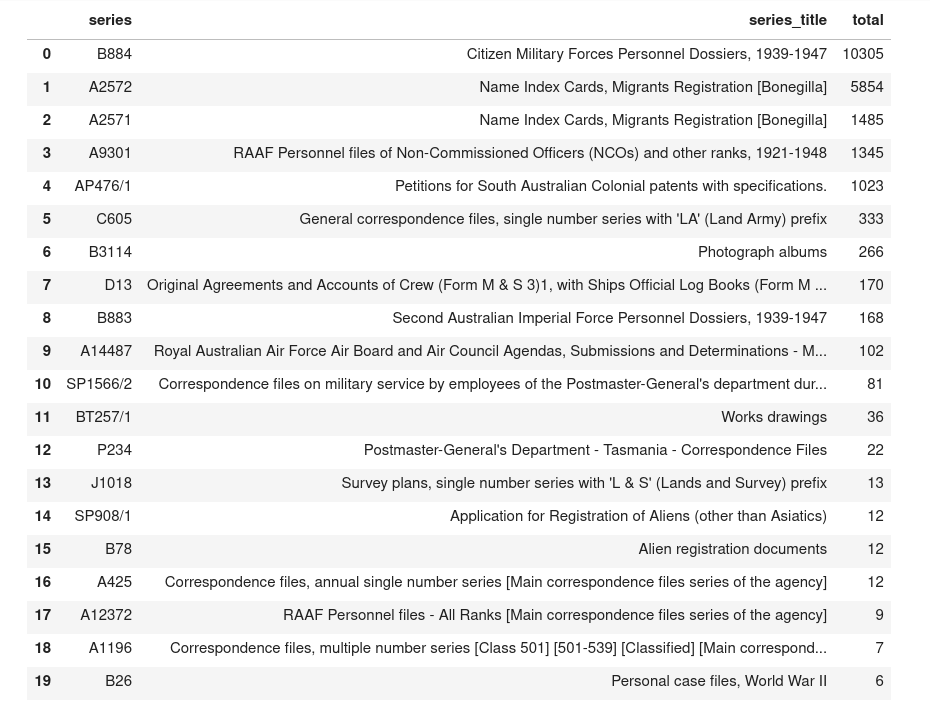 Changes to Trove newspapers this week:

Convert your Trove newspaper searches to an API query with just one click!

I’m thinking about the Trove Researcher Platform discussions & ways of integrating Trove with other apps and platforms (like the GLAM Workbench).

As a simple demo I modifed my Trove Proxy app to convert a newspaper search url from the Trove web interface into an API query (using the trove-query-parser package). The proxy app then redirects you to the Trove API Console so you can see the results of the API query without needing a key.

To make it easy to use, I created a bookmarklet that encodes your current url and feeds it to the proxy. To use it just:

This little hack provides a bit of ‘glue’ to help researchers think their about search results as data, and explore other possibilities for download and analysis. #dhhacks

Also on tonight’s episode of ‘In GLAM This Week’, the NAA digitised 20,517 files. Of these: 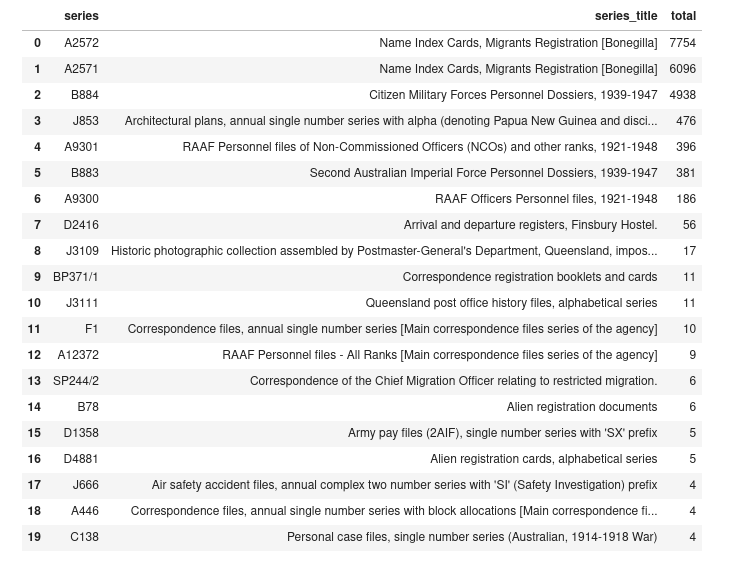 This week’s changes in Trove newspapers:

Another overdue maintenance task completed! The Tung Wah Newspaper index has been migrated from a custom Django app on a now defunct web host, to a nice, neat Datasette instance on Heroku. https://resources.chineseaustralia.org/tung_wah_newspaper_index 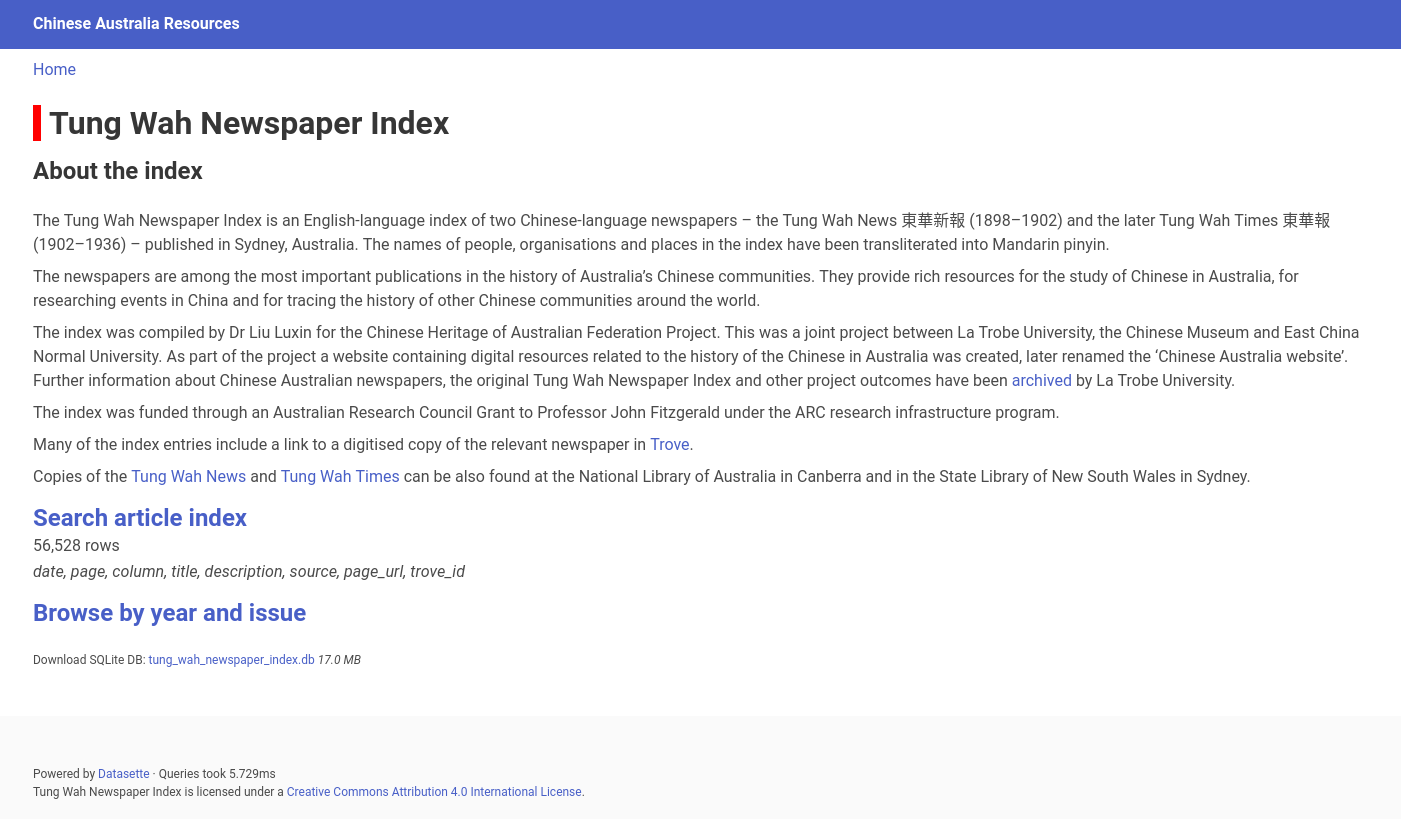 TIL you can do date maths in Trove. Searching for date:[NOW-10YEAR TO NOW] in newspapers & gazettes returns articles from the last 10 years. Try it: trove.nla.gov.au/search/ca…

The ARDC is collecting user requirements for the Trove researcher platform for advanced research. This is a chance to start from scratch, and think about the types of data, tools, or interface enhancements that would support innovative research in the humanities and social sciences. The ARDC will be holding two public roundtables, on 13 and 20 May, to gather ideas. I created a list of possible API improvements in my response to last year’s draft plan, and thought it might be useful to expand that a bit, and add in a few other annoyances, possibilities, and long-held dreams.

My focus is again on the data; this is for two reasons. First because public access to consistent, good quality data makes all other things possible. But, of course, it’s never just a matter of OPENING ALL THE DATA. There will be questions about priorities, about formats, about delivery, about normalisation and enrichment. Many of these questions will arise as people try to make use of the data. There needs to be an ongoing conversation between data providers, research tool makers, and research tool users. This is the second reason I think the data is critically important – our focus should be on developing communities and skills, not products. A series of one-off tools for researchers might be useful, but the benefits will wane. Building tools through networks of collaboration and information sharing based on good quality data offers much more. Researchers should be participants in these processes, not consumers.

Ok, I’ll admit, that’s a pretty long list, and not everything can be done immediately! I think this would be a good opportunity for the NLA to develop and share an API and Data Roadmap, that is regularly updated, and invites comments and suggestions. This would help researchers plan for future projects, and build a case for further government investment.

Obviously any discussion of new tools or interfaces needs to start by looking at what’s already available. This is difficult when the NLA won’t even link to existing resources such as the GLAM Workbench. Sharing information about existing tools needs to be the starting point from which to plan investment in the Trove Researcher Platform. From there we can identify gaps and develop processes and collaborations to meet specific research needs. Here’s a list of some Trove-related tools and resources currently available through the GLAM Workbench.

Update (18 May): some extra bonus bugs

I forgot to add these annoying bugs:

Spending the evening updating the NAA section of the #GLAMWorkbench. Here’s a fresh harvest of the agency functions currently being used in RecordSearch… gist.github.com/wragge/d1…

This morning has been all bug hunting. But at least I’ve now found & fixed the problem, & released version 0.0.14 of the RecordSearch Data Scraper! https://github.com/wragge/recordsearch_data_scraper/releases/tag/v0.0.14 Also updated on Pypi.

Changes in Trove newspaper titles in the last week:

Changes in Trove newspapers in the past week: I’ve got a site, I suppose I need to add some content now… glam-workbook.net #GLAMWorkbook

Working with Trove data – a collection of tools and resources

The ARDC is organising a couple of public forums to help gather researcher requirements for the Trove component of the HASS RDC. One of the roundtables will look at ‘Existing tools that utilise Trove data and APIs’. Last year I wrote a summary of what the GLAM Workbench can contribute to the development of humanities research infrastructure, particularly in regard to Trove. I thought it might be useful to update that list to include recent additions to the GLAM Workbench, as well as a range of other datasets, software, tools, and interfaces that exist outside of the GLAM Workbench.

Since last year’s post I’ve also been working hard to integrate the GLAM Workbench with other eResearch services such as Nectar and CloudStor, and to document and support the ways that individuals and institutions can contribute code and documentation.

Getting and moving data

There’s lots of fabulous data in Trove and other GLAM collections. In fact, there’s so much data that it can be difficult for researchers to find and collect what’s relevant to their interests. There are many tools in the GLAM Workbench to help researchers assemble their own datasets. For example:

Many of the notebooks listed above include examples that demonstrate ways of exploring and analysing your harvested data. There are also a number of companion notebooks that examine some possibilities in more detail, for example:

But there are also many other notebooks that demonstrate methods for analysing Trove’s content, for example:

There are also possibilities for using Trove data creatively. For example you can create ‘scissors and paste’ messages from Trove newspaper articles.

All the Trove notebooks in the GLAM Workbench help document the possibilities and limits of the Trove API. The examples above can be modified and reworked to suit different research interests. Some notebooks also explore particular aspects of the API, for example:

And while it’s not officially part of the GLAM Workbench, I also maintain the Trove API Console which provides lots of examples of the API in action.

I’ve started making videos to help you get started with the GLAM Workbench.

A number of pre-harvested datasets are noted above in the ‘Getting and moving data’ section. Here’s a fairly complete list of ready-to-download datasets harvested from Trove.

The GLAM Workbench makes use of a number of software packages that I’ve created in Python to work with Trove data. These are openly-licensed and available for installation from PyPi.

Other tools and interfaces

Over the years I’ve developed many tools and interfaces using Trove data. Some have been replaced by the GLAM Workbench, but others keep chugging along, for example:

Changes to Trove newspapers in the last week:

And so it starts… #GLAMWorkbench